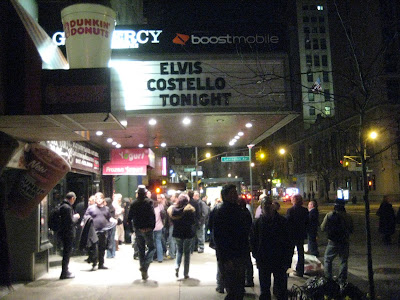 The Burgs ventured out a little later than usual Friday night, but it was for a good reason: Elvis Costello put on a last-minute concert at the Gramercy Theater. It started at 11:15 pm -- well past our traditional "wind down" hour and pretty much smack dab into the middle of what we call "bed time." 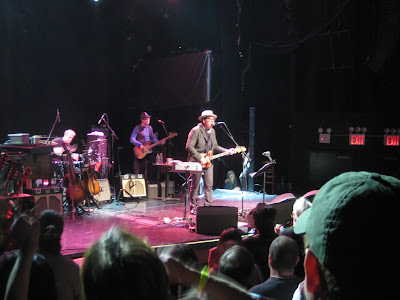 Don't worry, it was completely worth dragging ourselves out of the fortress of duitude (kind of like solitude, but for two people) and into Manhattan. He sounded AMAZING and played for nearly two hours straight. (Two encores!) It was all pretty fantastic. The Burgs are both longtime fans but neither had ever seen him live. Erik was very happy that he played a lot of his favorites like "Oliver's Army" and "Less Than Zero." Karen was hoping for "Green Shirt" or "Running Out of Angels" but no such luck (fingers crossed for the show in May.) 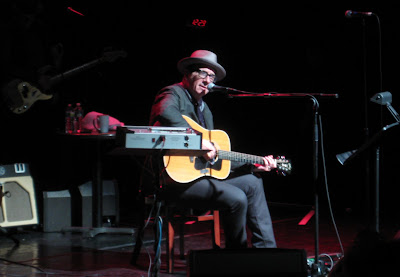 As evidenced by the digital clock on the stage (see picture, just above Elvis' head), it was a little late. It wasn't even his first his first gig of the evening, it was his third (he made surprise guest appearances at two other concerts earlier in the evening). The clock read 1:01 am by the time Elvis and his band left the stage. He has a lot more energy than you'd expect from a 56-year-old man, a lot more energy than, say, the Burgs . . . We were thoroughly impressed.
Posted by Erik at 7:38 PM