Universal Studios has a pretty good New York street too.

On her way home from work Karen was momentarily confused when she looked up and saw this: 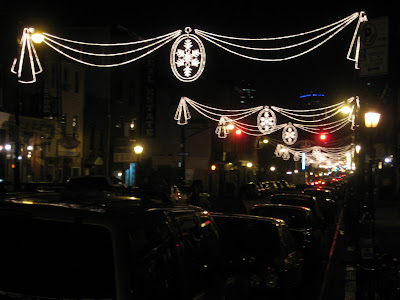 April is well underway and this was the scene on the street. Had the clocks suddenly turned themselves back and decided we hadn't had enough wintery goodness? Had we been whisked back to mid-December?
No, it seems that the holidays lights were part of a filming for a forthcoming film by Garry Marshall. (Mr. Marshall gave the world "Mork & Mindy," "Laverne & Shirley" and maybe some other things that don't involve ampersands). We expected this sort of thing in Los Angeles, but when it happens in Brooklyn, you really feel like you're being gaslighted.
Karen was delighted to learn that the weather system was not on some weird loop and we did not have to relive the brutal winter once again.