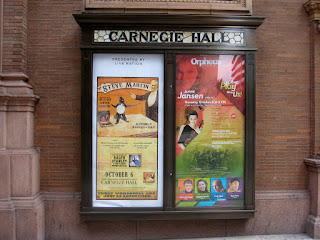 Steve Martin will be playing Carnegie Hall this week. He is touring for his recently released album of banjo music.
This is great news. Erik is for anything that keeps Mr. Martin from being in front of cameras as he now only appears in horrendous remakes (and sequels to said remakes) and makes smug cameos in TV shows. Erik wouldn't care but he remembers when the man was actually funny....his stand-up, "The Jerk," "The Man with Two Brains," "The Lonely Guy," "King Tut." Hilarious.
Fifteen years and untold spins in the grave by Peter Sellers later, he's making "The Pink Panther 2." So keep up the music career and...wait, nevermind...a quick check of the IMDB reveals that a remake of "Topper" will be slated for 2010. Mr. Martin will be playing the Cary Grant role. Well played, Mr. Martin. Well played.
Posted by Erik at 5:42 AM