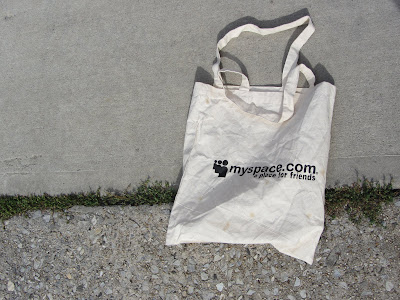 A lifeless myspace tote bag was found this Wednesday near the corner of Smith and Union in Brooklyn, NY. Although the tote hadn't really been used since late-2007, he attempted to blot out the despair of his final days by focusing on his love of music.
"Yeah, for the last couple years, he would just lock himself in his room and listen to a lot of crappy bands," said his roommate, a Friendster mousepad. "Newer stuff. Really bad."
He is preceded in death by a Napster koozie.
Posted by Erik at 8:45 AM

Email ThisBlogThis!Share to TwitterShare to FacebookShare to Pinterest
Labels: myspace