We bought a new camera. It has a pretty fantastic zoom. Erik decided to demonstrate its powers by taking shots of a boat out at sea while we were hiking along the water. 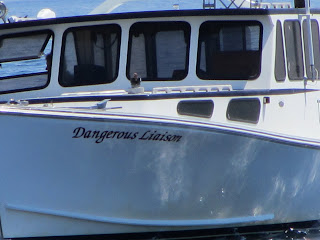 So many questions for that Captain, so little time. Karen thinks there's maybe at 50% chance the boat belongs to either Keanu Reeves or Michelle Pfeiffer . . .  they both seem like people who wouldn't notice a typo.

Another question: Who owns the boat actually named Dangerous Liaisons? Erik thinks the smart money is on Stephen Frears.
Posted by Erik at 7:30 PM