Karen had to go work in Boston for a week. She was happy to go, but not so happy about her overly ambitious 6:30AM flight time. She arrived at LaGuardia roughly 23 minutes after leaving our apartment and quickly learned that she was:

B) Possibly flying out of the first airport terminal. Ever. This was the "lobby": 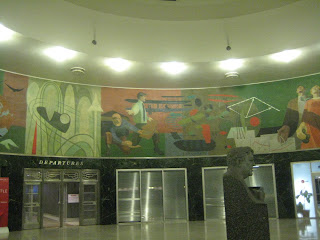 Note the complete and total lack of other travelers, the sign font, the old school cafeteria "restaurant" instead of a Starbucks/McDonald's kiosk, etc. 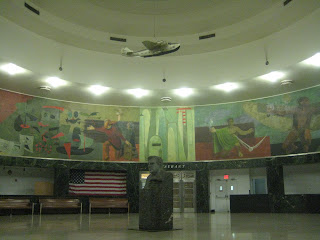 The mural depicts man's obsession with and eventual discovery of flight. Yeah, Karen got there early enough to read the whole story, it was actually pretty good. 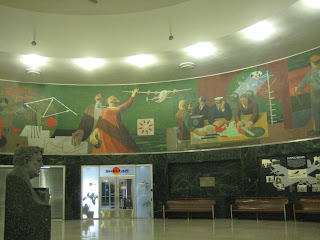 The more seasoned commuters knew to arrive AFTER the security gates opened at like 5:30AM. Not, sadly, at 4:45AM.
Posted by Karen at 2:24 PM